As deer breeding season, commonly referred to as “the rut,” ramps up, the number of incidents between vehicles and deer typically increases. On October 25, TLA Security responded to such an incident when a vehicle struck a deer. The car involved was damaged so extensively it had to be towed from the crash scene. The driver was not physically injured.

TLA Security and Chatham County Police Department (CCPD) are working together regarding a pedestrian who has been seen and reported as “jumping in front of vehicles to get a ride.” Please, remain cautious of pedestrians on the roadway, and report unsafe conditions to TLA Security and CCPD.

TLA Security and CCPD responded to a request for assistance regarding an incident involving juveniles on October 24. The allegations of harassment and attempting to run a golf cart off the road are being investigated by CCPD.

On October 20 or 21, a residence was targeted by a person with a paintball gun. No witnesses or suspects were identified at the time of the report, no further reports were received, and extra patrols were conducted in the area.

A resident has reported on more than one occasion vandalism to his flag. Patrols have been increased in the area.

TLA assisted the Marinas staff with identifying a boat and trailer parked in The Landings Harbor parking lot without permission. The boat owner previously received a few warnings for parking the boat overnight on their property. Contact was made with the boat owner, and the boat was removed. Residents are reminded parking overnight in any of TLA’s parking lots requires permission and vehicles can be towed at the owner’s expense

TLA Security continued to perform welfare checks last week, all of which had favorable endings. It remains a concern, however, how many residents have not taken the time to list emergency point(s) of contact on their file (www.GateAccess.Net) with TLA.

* In accordance with our appeals procedures, persons issued warnings or citations have the right to file an appeal within 10 days. 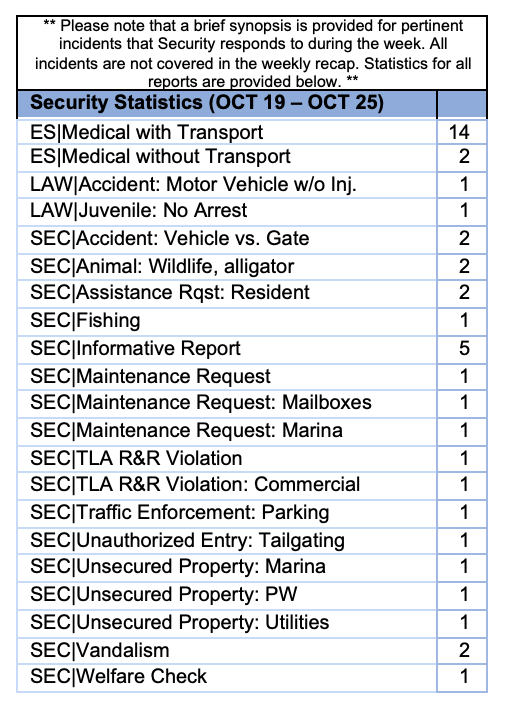