50th Anniversary Golden Nugget of the Week: Number of Kids in the Early Years

In the early years, The Landings had difficulty attracting Savannah families. The majority of homeowners were retirees from the Northeast and Midwest. As a result, roughly 75% of the 896 Landings homes that existed in 1982 had no children at all! But that didn’t mean there were NO children in the community. Back then, The Landings Association estimated a community population of roughly 2,500, with 17% falling in the age bracket from 0 to 19. That translates to 425 kids!

Those kids lived in a virtual paradise, safely biking the roads and trails, fishing the lagoons and Marina, building “forts” on vacant lots (unless Officer Charlie Hires stumbled upon them), and enjoying access to swimming, boating, tennis, golf, and poolside dining. Indeed, so accustomed were they to a “club lifestyle", that one child on a chaperoned field trip to the Oceanographic Institute sought to buy items in the gift shop using his plastic Marshwood Club card.

On a more organized basis, kids’ clubs included Brownies and Girl Scouts, Cub and Boy Scouts, as well as Sea Scouts, a Swim Club, a Golf Club and a Tennis Club, this last run by the fabled Wally Norwich, the Pied Piper of the sport. (Later, Norwich would go on to a successful career as a high school and college tennis coach in Florida.)

Perhaps the single largest group was the Swim Team that competed against kids from Mayfair, Isle of Hope, and Windsor Forest. The 1981 team is pictured below. All its members are now in their 40’s and 50’s with an unknown number currently living in The Landings with families of their own! If you see your picture there, let us know and tell us your story. We’d love to hear your perspective of what life was like growing up on the island. (The red dots mark Richard Burke's two children, aged nine and 11 at the time.) 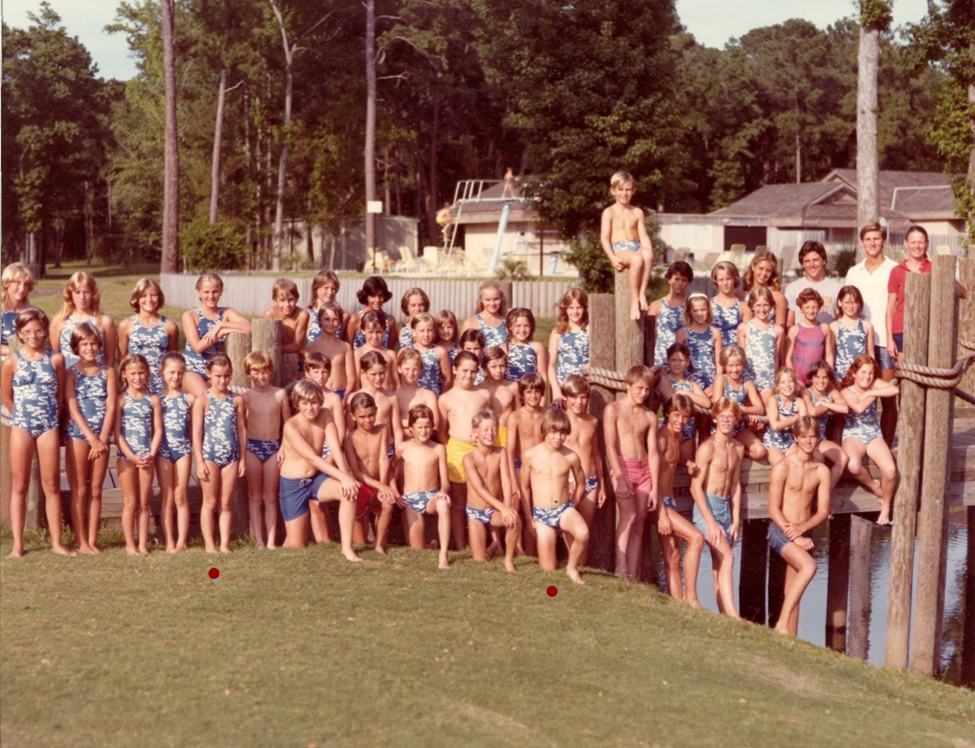