On July 31, Chatham County Police Department (CCPD) and Security responded to a resident’s home regarding an unwanted visit by another resident and allegations of threats. CCPD issued the resident a No Trespass Order. No further incidents were reported.

On Friday, July 29, a cyclist reported that a white BMW X5 in the area of Little Comfort Road and Land Bridge Lane allegedly failed to stop and almost hit him. Security identified the vehicle in question and followed up with telephone calls to advise the owner of the reported incident.

On Friday, July 29, Security responded to Middleton Road regarding what appeared to be a BB gun pellet hole in a vehicle’s rear window. Security initiated a canvass of the neighborhood to gain any available camera footage or witness statements. The incident was reported to CCPD for further investigation and possible criminal charges. Parents and gun owners are reminded they could face criminal and civil penalties for such incidents.

On Friday, July 29, CCPD and Security responded to an MVC at the intersection of Landings Way South and Activity Drive involving two vehicles. One of the drivers appeared to have failed to stop at the stop sign and struck the other vehicle, which caused a significant amount of damage. No injuries were reported, and one of the vehicles was towed from the scene. CCPD conducted the investigation and cited the driver at fault. 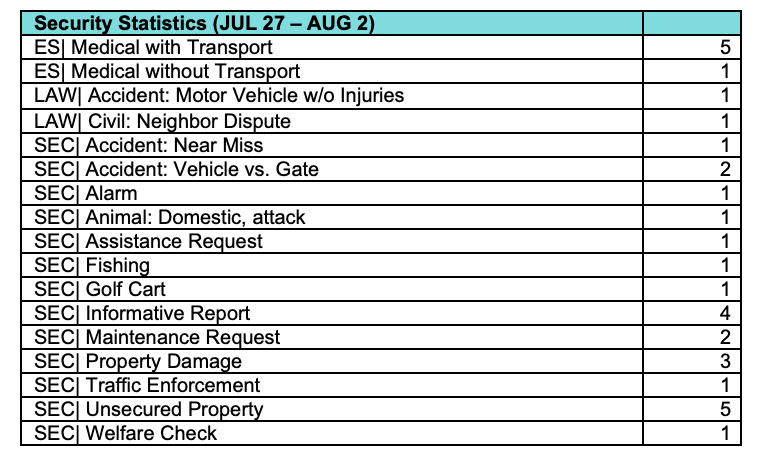