On Wednesday, July 13, Security responded to a residence for a reported dog attack. A man was walking his leashed dog for their morning walk when he reports two other leashed dogs went after his dog. The owner attempted to shield his dog from the other two and sustained minor injuries. His dog did not appear to have any injuries, although she was shaken and scared. Security has continued to obtain witness statements regarding the incident, and the report was sent to Chatham County Animal Services.

Security and Chatham County Police Department (CCPD) responded to Modena Road for a report of theft from a vehicle on Wednesday, July 13. A handgun and $10-$15 cash were stolen from the vehicle, which was left unlocked. However, a wallet with $400 was left behind. The car owner believes the theft occurred between 6 a.m. and 1 p.m., as everything was still in the vehicle at 4 a.m. when he walked his dog. CCPD is investigating.

On Wednesday, July 13, Security responded to McEachern Court for a report of theft of an American flag. The resident advised that he noticed the flag was missing at approximately 7:05 p.m. on July 11. Unfortunately, his Ring camera did not catch anyone taking the flag. He did not want to file a report with CCPD.

On Saturday, July 16, Security responded to Dame Kathryn Drive for a report of a woman screaming like she was in distress. An officer patrolled the surrounding area and did not hear any screams. Additionally, he did not see anything out of the ordinary. No further incidents were reported. 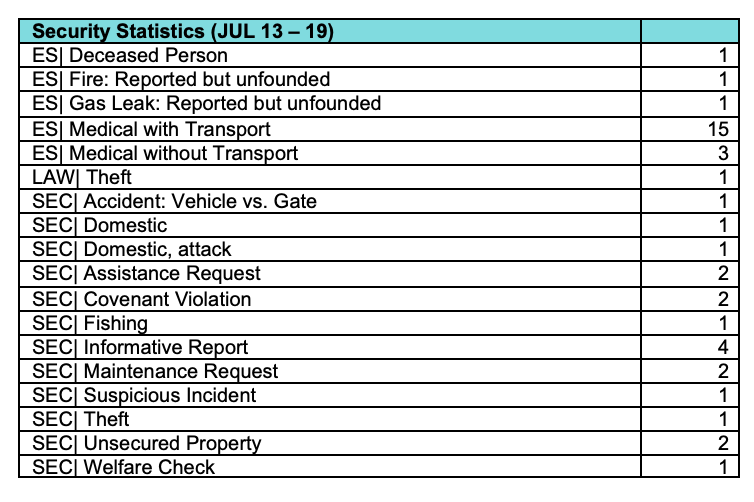