On Friday, June 17, Security spoke with an individual regarding a theft from a residence on Buckhead Lane. The individual advised two individuals entered his in-laws' home, stole checkbooks, and wrote checks worth thousands of dollars to themselves. It is believed the individuals were invited into the home by an authorized vendor associated with the residence. At the time of the report, it was unknown if any other items were missing. A report was filed with Chatham County Police Department (CCPD), and they are investigating.

On Wednesday, June 15, Security responded to Bartram Road North for a report of theft. The resident informed the responding officer that they placed their yard debris in a black trash can and put it by the curb Monday evening. However, the trash can was not retrieved on Tuesday due to the weather. When he went to retrieve the trash can on Wednesday, it was no longer there. The trash can held no monetary or sentimental value, and the report was filed for informational purposes only. No other incidents were reported.

Security responded to Caisson Crossing for a report of theft on Wednesday, June 15. The resident stated his crab trap was stolen from Landings Harbor Marina. He advised that he dropped a crab trap around 7 p.m. the previous evening, and when he went back, the trap was gone. Staff checked the video camera system and found that the trap was stolen at approximately 10:30 p.m. The identity of the suspect is unknown at this time. The value of the trap is approximately $46.

Security and CCPD responded to an altercation between two parties on Friday, June 17. Due to varying stories of the incident from each party and no impartial witnesses, no arrests were made. A report was filed by CCPD. 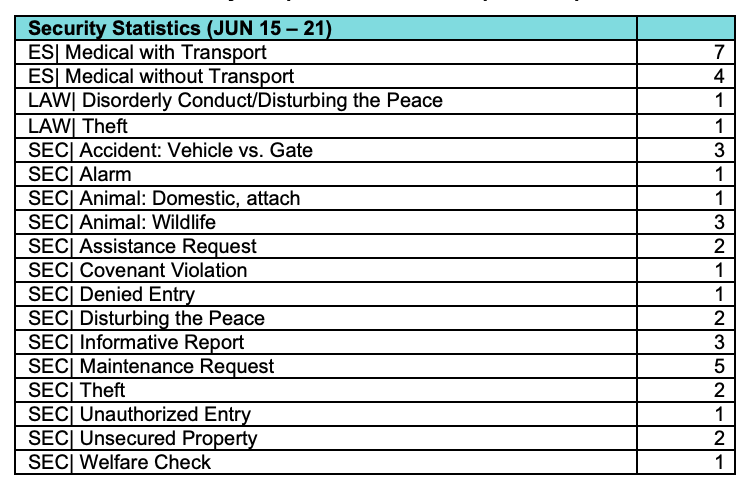