On Monday, May 9, Security, Chatham Emergency Services (CES), and Chatham County Police Department (CCPD) responded to a two-vehicle accident with injuries at the intersection of Westcross Road and Pepper Bush Circle between a resident and a vendor. The resident was traveling on Westcross Road and collided with the vendor attempting to make a left-hand turn from Cabbage Crossing. However, his vehicle was significantly damaged and removed from the scene via a tow truck. The vendor and his passengers were treated on scene for injuries and transported to the hospital for further evaluation. The resident did not sustain any injuries in the collision. His vehicle sustained minor damage and was driven away by a friend. The vendor was cited by CCPD for failure to yield and no driver’s license.

Security responded to Seawatch Drive on Tuesday, April 10, for a report of possible gunshots in the area. The complainant advised that he heard approximately four shots within a 30-second time period. Officers patrolled the area but did not see or hear anything unusual. No further incidents were reported.

On May 11, Karl Stephens and Tim Cook met with a concerned resident to continue conversations about acquiring an ambulance dedicated to Skidaway island, which is currently not provided by Chatham Emergency Services. The conversation included data covering the percent of calls for service to The Marshes, Thrive, and the island’s general population, ambulance response times for Skidaway Island compared to Countywide averages, and discussions during previous meetings involving various stakeholders. The data will be provided to the Board of Directors for their edification and further discussion at next week’s Board Workshop. 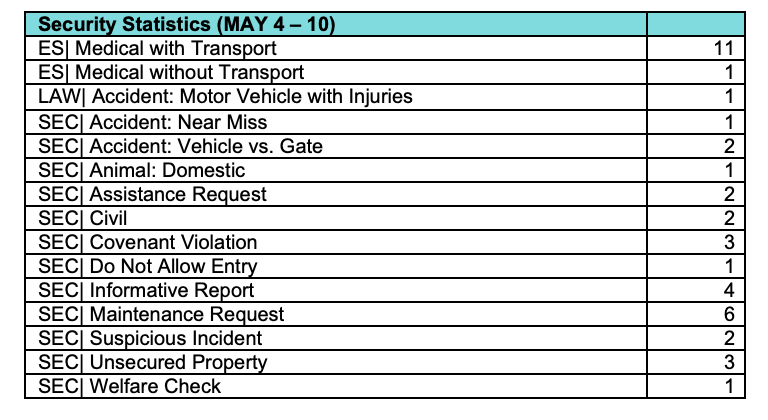