Bill and Peggy Foster have lived here longer than any other Landings owner, but they were not the first to move into the community. That distinction belongs to Elbert and Helen Little, who bought their lot in 1972, built their own home at 4 Tything Man Lane, and moved into it in 1973, claiming Club Membership #14!

Branigar honored this singular place in the community’s history by inviting Elbert and Helen to cut the ribbon at the Grand Opening of the 1,831 acre 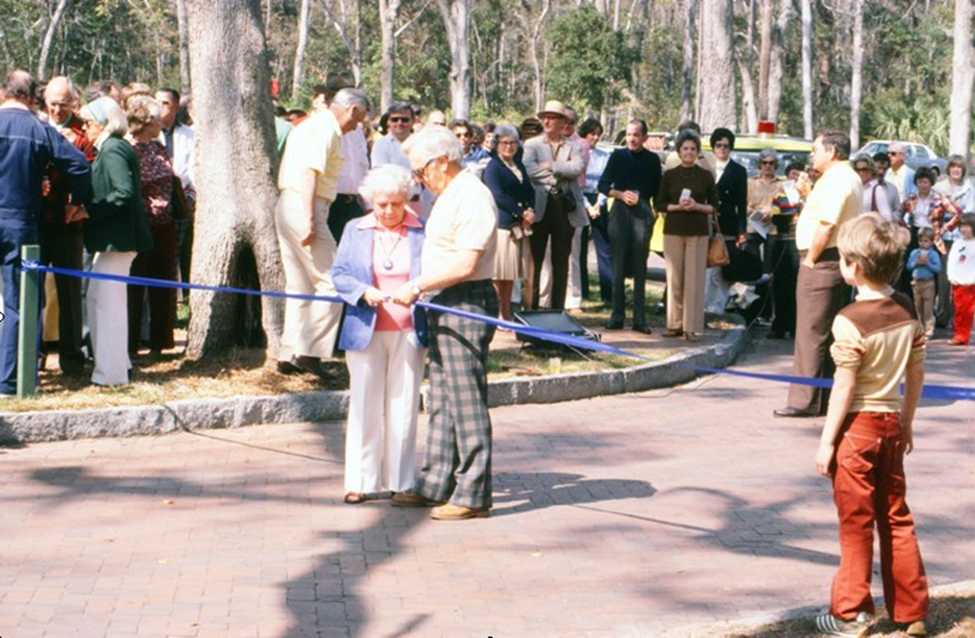 Plantation/Palmetto section of The Landings in 1980.

Elbert, known to his friends as Dixie (the name he put on his golf cart), was in reality a Yankee, born in Brooklyn. His wife, Helen, was born in Connecticut. They met and married in 1939 and the 1940 census lists his occupation as “salesman” and Helen’s as “nutritionist” in a school cafeteria. But by August of 1941, Dixie had enlisted in the Army and when war broke out three months later, he found himself fighting in the Pacific Theater. Although he was discharged when the war ended in 1946, he re-enlisted in 1950 and spent the next two years fighting in Korea, where he rose to the rank of Lt. Colonel. (This long exposure to Asian culture seemed to rub off on the couple and the furniture, fabrics, art, and curios they acquired for their homes had a distinct Asian character.)

Although Dixie took a financial management job in New York when he was discharged from the Army, he decided to pursue a career as a builder and for reasons unknown, picked Savannah as the perfect place to begin. Dixie moved the family south in 1956, enrolled his son and namesake Elbert, Jr. (known as Buck) in Benedictine Military Academy (at that time located on Bull Street) and began restoring old, and building new, homes throughout the city. Before moving to The Landings, the Little family lived in a home Dixie had built on Althea Parkway in Kensington Park. His biggest project was developing Meridian Drive in Oakdale, an area off Waters Avenue, south of DeRenne and north of Eisenhower.

At The Landings, Dixie and Helen enjoyed golf and boating. (They kept a boat named Blue Chip at Landings Harbor.) The family were communicants at St. James and Dixie was a member of The Knights of Columbus. Elbert, Jr. (Buck) was their only child. He was Captain of the football team at BC and like his dad, had a strong sense of duty to his country, serving as a helicopter pilot in Vietnam. Tragically, Buck died of leukemia in 1980 at the age of 37, two years before Dixie died, and six before Helen passed. But Buck had two children and they offered the most important tribute any grandparent can receive: “They were always kind and loving for the short time we had them in our lives.” May we all be remembered that way.