On Thursday, October 7, Security and Chatham County Police Department (CCPD) responded to a vehicle versus deer accident on Landings Way South near Pelham Road. The driver stated that she was driving on Landings Way South towards the exit when a deer ran into the side of her vehicle. The driver advised that the deer got up and ran off after striking her vehicle. The passenger side door and mirror and the front fender were damaged from the incident.

Security and CCPD responded to a two-vehicle accident with injuries at the intersection of Diamond Causeway and McWhorter Drive between a Landings Club employee and a commercial vendor on Thursday, October 7. The vendor was exiting the Main Gate and ran the stop sign at the Diamond Causeway intersection, striking the passenger side of The Landings Club employee who was turning onto McWhorter Drive. The vendor was treated on scene for his injuries, and the Club employee was transported to the hospital for treatment. Both vehicles received substantial damage and were towed from the scene. CCPD cited the vendor for failure to stop at a stop sign.

Security and CCPD responded to a verbal altercation on Monastery Road regarding a truck parked within the easement. No arrests were made.

On Saturday, October 9, a resident stopped at the Main Gate to report a suspicious incident. The resident advised that he noticed a sticker and some striping on his trailer that had not been there the last time he used it, which was approximately two or three weeks prior. The trailer is stored at the RV lot off McWhorter Drive, and it did not appear to be damaged. The resident is sure the sticker and striping were not on the trailer previously. When the items were placed on the trailer, where the incident occurred, or who may have done it is unknown.

Security responded to a residence on Yam Gandy Road for a suspicious incident on Saturday, October 10. The complainant advised that an unknown vehicle had been parked in her driveway for approximately an hour. Security made contact with the person inside the car and learned that he was a resident who lived nearby. The man explained that he was trying to make his way home, and Security assisted him safely getting back to his residence. The complainant was advised of the findings.

Security continues to receive reports of contractual (verbal or written) disagreements and allegations of fraud or theft by conversion with various vendors on Skidaway Island. The Landings Association does not get involved in third-party disputes, and criminal matters are turned over to the appropriate law enforcement agency. Residents are strongly encouraged to do their due diligence before hiring a vendor/contractor. 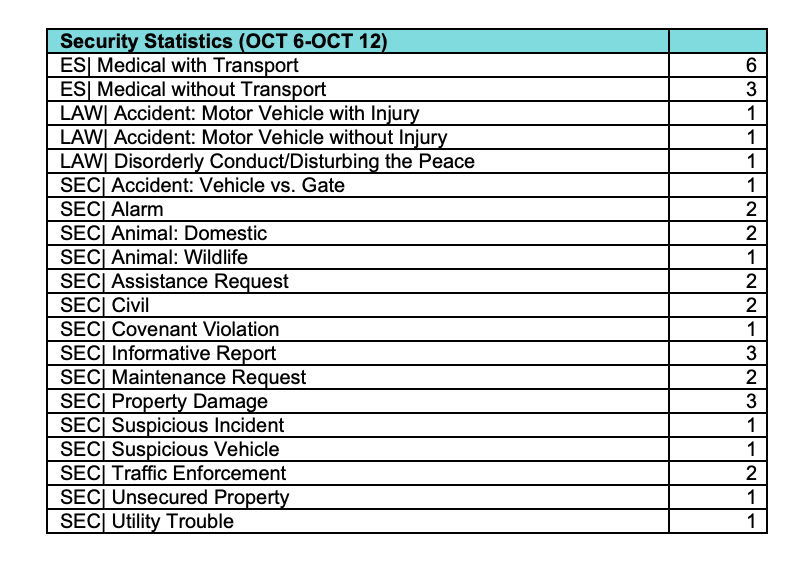