The lagoon crew completed the lagoon cutbacks in Midpoint on Wednesday and progressed to Oakridge thereafter.

On Tuesday, staff replaced the barrier arm at Landings Harbor Marina which was inoperable and unrepairable. Staff was able to construct a new barrier arm with repurposed parts within the department and the barrier arm is now fully functional.

On Monday, inhouse crews completed several maintenance items around the RV Yard including repairs and replacement of old worn number plaques along with some minor repairs to the gates. Staff also inspected the fencing around the facility and regraded the driving surface.

During an inspection of the McWhorter Bridge, staff noted that several maintenance items needed to be addressed which included the replacement of a guardrail post and the tightening of several loose boards.  All work was completed by inhouse staff this week.

On Thursday, Public Works managers met onsite with Landscape Structures/Playground Creations and its subcontractor to walk the complex and ensure that all prep work being conducted by Public Works staff was in line 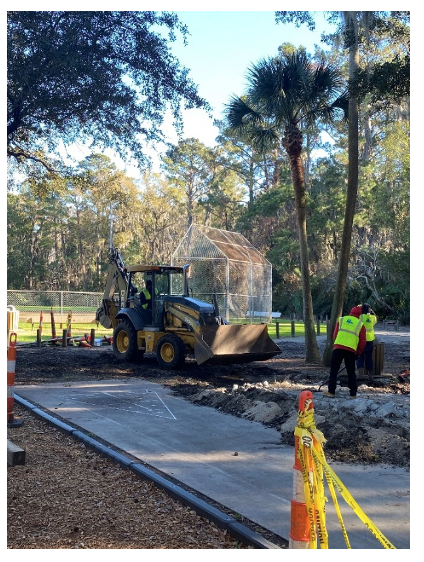 with what was needed by the contractor prior to their demo and installation that is scheduled to begin on February 8.

Additionally, Public Works staff began the demolition of the shuffleboards to make way for the installation of the various playground elements.  Public Works staff also completed tree work around the complex which included the following: removal of several trees, uplifting trees around the playground and basketball court and the removal of large tree roots along the proposed path track.

On Tuesday, Absolute Concrete began to repair the cracks and uplifted area on the basketball court (damage sustained during Hurricane Matthew).  The basketball court will be closed until further notice as the concrete repair to the court requires several weeks to cure prior to the resurfacing that is scheduled to be completed in February by Sporting Concepts.  Communications were sent to the community to inform them of the basketball court closure and progression of the project.