Q. What is The Landings Association’s Athletic Complex?

A. This is a 45-acre park setting located in the heart of our community adjacent to the Association’s Admin Building at 600 Landings Way South. The amenity includes a Nature Preserve with a one-mile walking trail dotted with benches; multi-purpose athletic fields for soccer, lacrosse, baseball, and softball; a parkour trail around the perimeter of the fields; a playground and swing sets; a basketball court; and, restroom facilities. These environs cultivate social interaction and community cohesiveness, sensory stimulation, physical activity, health, and wellness among all generations of our community. 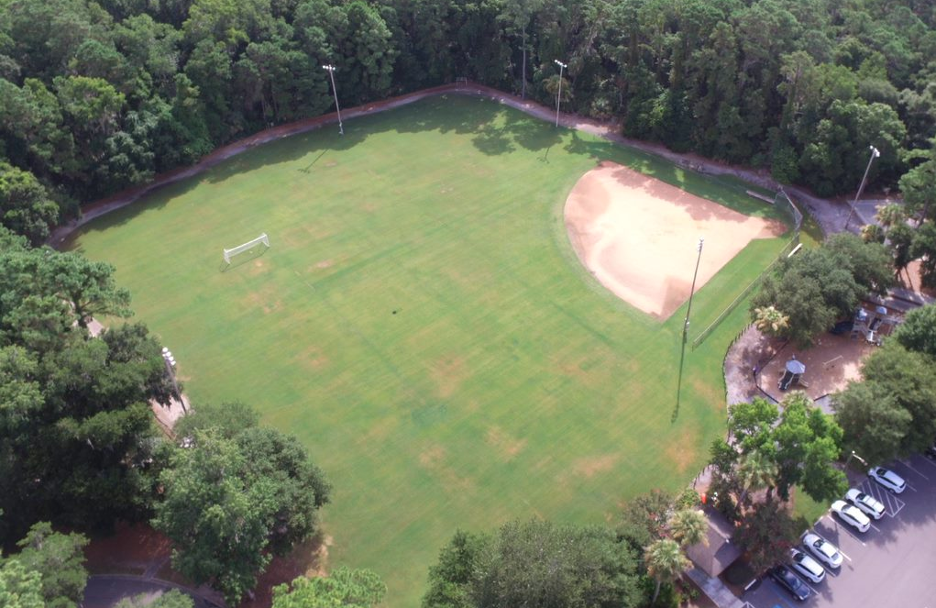 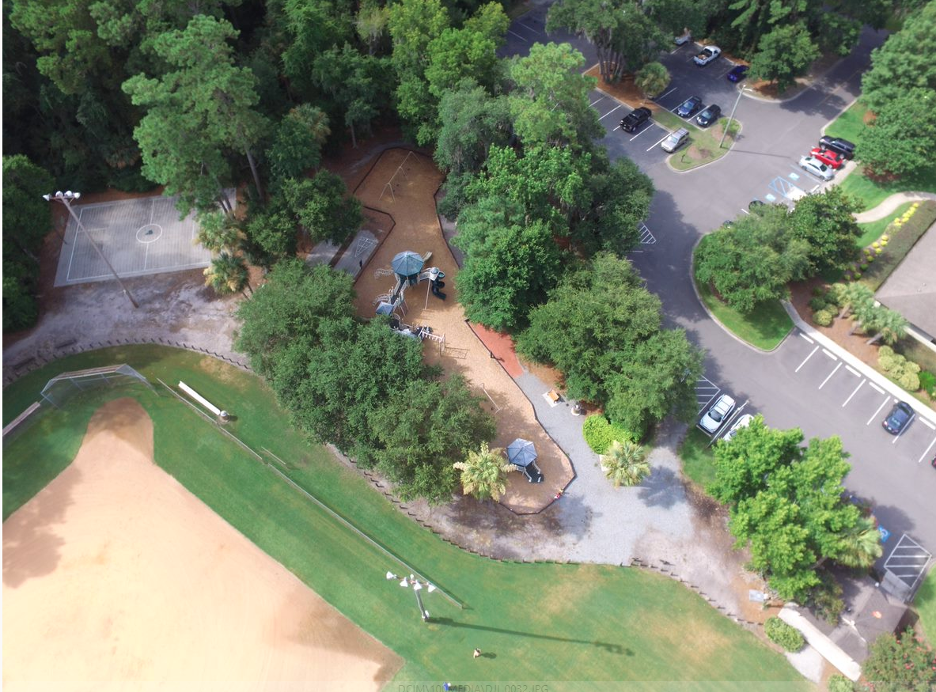 Q. What are the main components/additions of the proposed project?

A. With a successful vote, the project includes replacement of the existing 20-year-old playground equipment with new, innovative playground additions (e.g., zipline, inclusive play structures); a 24’x 24’ shade pavilion for small events and protection from the sun; replacement of the parkour trail with a permeable, shock-absorbing safety surfaced walking/jogging track; upgraded lighting; resurfacing of the basketball courts and new hoops; and an addition of a 3rd base line safety netting.

Q. How were the projects and designs determined?

A. A community volunteer committee has been devoted to working on this project over the past year. Volunteers were solicited from the community in July of 2019 for their interest in participating on this committee. The Association’s Board of Directors made appointments to reflect broad representation of the community (e.g., age, location in community, kids/no kids, professional background, longevity in Savannah and The Landings, etc.). The committee’s first meeting was held in August of 2019, and it has been meeting monthly.

Q: How did the committee determine the necessary design elements/project scope?

A: Committee members developed a project scope which included feedback from past community surveys, coupled with design elements that met the need for multi-use and multi-generational amenity improvements.​ The committee also compiled equipment “wish lists” based upon subcommittee working groups (0-4, 5-8, and 9+ age groups).

Q: What specifically is included in the Project, and how much does each element cost?

A: The total project cost is $575,395. However, the total addition to the Association’s Capital Asset Management Plan (CAMP) for the project in this Annual Dues proposal is $356,890. The CAMP currently has $218,505 scheduled in the Reserve Fund for basic replacement of some of the playground equipment, irrigation, and fencing. The Reserve Fund does not include funds for upgrades and enhancements like upgraded playground equipment, the walking/jogging track, the shade pavilion, added safety netting, or the improved lighting.

Playground Equipment - $253,510 - This provides improved, safer, and highly innovative equipment for all age levels, including a zipline, friendship swing, additional climbing and play structures, and a geometric play structure which promotes continuous play with many entry points.

Rubberized Walking/Jogging Track - $100,471 - This quarter-mile, permeable and shock-absorbing rubberized track around the perimeter of the fields replaces the obsolete parkour track and provides a vehicle-free, low-impact safety surface alternative to the concrete paths throughout the community. It will be designed as an extension of enhanced entrances to the Nature Trail.

Improved Lighting - $68,700 - Enhanced lighting, including electrical upgrades and timers, is proposed across the complex to enable increased hours of use during winter months for soccer, lacrosse, softball, playground, and track use.

Pavilion - $48,840 - A 24’ x 24’ pavilion will provide a shaded respite from the sun, an outdoor gathering spot for family gatherings or birthday parties, as well as for parents during team practices.

Safety Fencing/Netting - $51,000 - This repairs/replaces the basketball backstop/dugout fence, the perimeter fence, the wooden piles separating the fields, and adds safety netting along third base.

Grounds Repairs - $29,300 - This allows for the replacement of the irrigation system, drainage improvements, the repair and releveling of the brick walkway, and selective tree removal.

Q: I thought money was raised recently to replace the playground equipment? Is that true?

A: No. In 2015, a smaller, unofficial playground committee was formed with the intent of raising funds for improvements to the playground through a Marathon being held in the community. Although funds from the Marathon were originally anticipated to be donated towards the project, proceeds from this race were donated to volunteer groups that helped the Marathon organizers run the event: First Responders, Kiwanis, and Rotary.

Q: How old is the playground?

A: The current playground equipment was installed in 2000, so it is 20 years old.

Q: What is the standard asset life of playground equipment?

A: Depending on the product, playground equipment has an average asset life of 15-20 years. Although the main structures/elements of the playground last 15-20 years, certain elements have deteriorated, have been damaged, or been subject to vandalism. Our coastal environment does play a role in the expedited deterioration of some of the elements as well.

Q: How were the vendors selected?

A: The Athletic Complex Committee vetted local installers and state and national playground manufacturers. Three qualified vendors were selected to submit designs for the playground equipment based on the committee’s requirements and recommendations. The following vendors were invited to bid on the project: Korkat (Superior Playground), Hasley Recreation (Miracle Playground), and Playground Creations (Landscape Structures Playground).

Q. Should the Annual Dues Proposal be approved, when should we expect the project to begin?

A: If the Annual Dues Proposal passes this fall, the committee will accelerate the project as quickly as possible, with a beginning start date of fall 2020. Pending vendor and product availability, the project is anticipated to be completed by the end of 2021.

Q. Why is this project not being considered for a Special Assessment Vote or a fundraising opportunity?

A: The existing amenity was installed and donated to the Association in 2000 through a community fundraising initiative. Thereafter, these improvements became an asset of the Association to maintain, including any and all feature replacements/repairs and total replacement once the asset reached its useful life. The unfunded portion of this project is included within the Annual Dues Proposal, as it is an asset owned by, and benefitting and enhancing, the entire community, just like our roads, storm drains, community paths, and other amenities located throughout the community.

Q. Who are the members of the committee?

Jan Bishop and her family moved to The Landings in 2006. Since she moved into the community, she has spent a great deal of her time volunteering to include serving on the Tennis Committee (9 years), the introduction of pickleball at The Landings through 15-20 clinics, the creation of LWTA (Landings Women’s Tennis Association) and even won the prestigious Volunteer of the Year Award from The Landings Club. Jan has five grandchildren who frequently used The Landings playground as they grew into teens. As a family, they play baseball, kickball, and touch football around the holidays, specifically at Thanksgiving. Her passion for sports, children, and volunteerism ultimately lead her to want to chair the Athletic Complex Committee.

Caitlin has been a resident of The Landings for eight years along with her husband, Michael, and two children, Carter (6) and Amelia (4). Caitlin’s husband grew up on Skidaway Island, so it was a natural next step to start their family from their previous home in Atlanta. Having shifted from a career in Advertising Sales, Caitlin enjoys spending time with family and friends, traveling, and being outdoors. She currently volunteers for several committees on the island to continue making The Landings the wonderful lifestyle community that it is!

Bill Bayfield has an extensive background in marketing, education, and export regulations. His love for children and coaching is evidenced by his 19-year coaching/official experience. He has lived in The Landings since 1998 with his late wife, Ouida-Anne, who passed away in 2012 – they have two children (girls). Bill married his high school sweetheart, Penny, in 2014 and has served on The Landings Club Board. He joined the Athletic Complex Committee because of his love of kids, sports, and our community.

Pat Brooks and his wife Jill have been Landings residents since 2004. Their two sons grew up using the existing playground equipment, basketball courts, and soccer fields. Their boys, like many Landings youth, learned to ride their bikes on the hard clay of the softball field and have enjoyed using the field over the last 16 years. Pat and several friends routinely flip big tires and toss medicine balls on the field. They also enjoy playing adult soccer in the winter. Pat joined the committee to be part of the much-needed improvements to the facility, which include the proposed replacement of playground equipment, refurbishment of the basketball court, along with the proposed addition of amenities like the continuous walking path, which would truly make this area a multi-generational activity hub.

Amy Donahue was born and raised in Savannah. She is married to Stephen Donahue who is also a Savannah native. Amy and Stephen have two children, Owen (6) and Ellie (4), and have lived in The Landings since 2015. Amy took the opportunity to join the Athletic Complex Committee to provide a voice for many of the young families on the island who, like the Donahues, decided to raise their families in The Landings. Her family loves playing on the playground and have been a part of several soccer and baseball teams that use the fields regularly for practice.

Brett Feemster grew up living in The Landings with his parents, Dwight and Barbara Feemster. He, his wife Katie, and three children, Callie (4), Annie (2), and Jack (1) relocated to Savannah two and a half years ago. Brett and his family love living in The Landings, being close to family and getting involved in the community. Brett joined the Athletic Complex Committee as he wanted to represent a younger generation in the community, while having the ability to bring new, fresh ideas to the table from experience he and his family have with playground equipment and facilities in the greater Atlanta area.

Dave Krautheimer has been involved in youth sport activities from baseball to soccer, with involvement in the Boy Scouts as well. When his grandchildren were younger (they are now 11, 13, and 16), they enjoyed utilizing the facilities, specifically the playground, baseball field, soccer fields, and basketball court. Dave is excited to see the complex incorporate some additional features and equipment that weren’t available when the grandkids used the equipment. He says, the interesting thing about our proposed equipment update is that the new equipment can be used across multi-generations and offers an educational experience as well.

Jim moved to the Landings in 2015 after a career that saw countless moves. He and his wife raised their three children in many diverse, multi-cultural locations and military installations, both stateside and overseas. Wherever their moves took them, Jim’s family was involved in sports and community activities. Often, the athletic field or the playground was a central place where adults and children formed lasting friendships. Shortly after moving to The Landings, Jim committed to serve his “forever community”, and serving on this committee is giving him the opportunity to help create a gathering place that will be a major asset to The Landings and families of all ages.