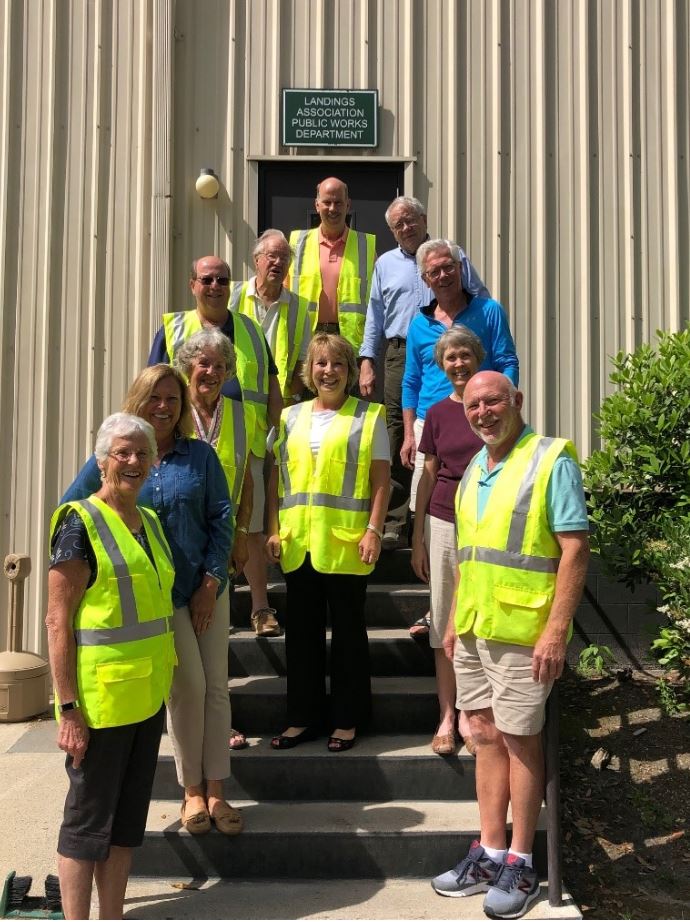 The R-3 (Reduce, Reuse, Recycle) Committee is the recipient of the 2019 Volunteer Group of the Year Award. The group led by Chair Connie Squibb began in 2018 after Squibb witnessed, again and again, the inability of some residents to properly use the cardboard compactor at the Landings Recycling Center.

“I posted to social media, pictures from the Recycling Center on a Monday morning,” Squibb said. “It was horrible! Numerous people replied with similar stories and comments. After I presented at a Landings Association Board Meeting, the R-3 Committee was born.”

It didn’t take long for Squibb to find others just as interested as she was in making a positive difference at the Center.

“We started with on-site volunteers,” she said. “Don McCulloch was our volunteer coordinator while Russ Liedtke and Caryl Warner stepped up to be great confidantes. Einar Anderson was our secretary, Lisa Olson served as our communications coordinator, and Ingrid Poppell was our Landings Association resource."

The R-3 Committee’s focus is on reducing the amount of waste put into the environment. Its original focus was on recycling. However, as the market became saturated with available newspaper, plastic, and cardboard beyond current needs, the focus shifted to Reduce and Reuse.  Reducing the proliferation of plastic is a main goal of R3, but there are other areas to examine for improvement. Initiatives are ongoing to address education, venues to promote wise selection and use of materials, and options for residents going forward since recycling of plastics and cardboard at the Center was suspended in late October 2019.

Squibb is extremely proud of the work of the R-3 Committee and believes her fellow committee members feel the same way.

“This was merely an idea that made sense to me, and when others came forth with similar stories and wanted to make a difference, it all came together,” she said. “This has been one of the most exciting opportunities I have been given.”

Landings Association General Manager/COO Shari Haldeman said she is inspired by the R-3 Committee, and greatly appreciates the work these neighbors do on behalf of the Landings community.

“This organization is the epitome of environmental sustainability,” Haldeman said. “We recognize these humanitarians for the positive impact they have on the quality of life for others in our community. Our respect and gratitude to the dedicated men and women who make up this wonderful organization are well deserved.”

“There are so many people who do so much on this island,” he said. “Our community is extremely fortunate to have such generous, involved residents who not only are concerned about the well-being of our community today but its future well-being. R-3 is another example of the giving spirit of The Landings, and I congratulate them on receiving this honor.”

The Volunteer Group of the Year Award is intended to promote and reward volunteerism at The Landings. The recipients are those individuals who have gone above and beyond expectations to offer their time, talent, and expertise to a cause that benefits others.

To qualify for nomination, the group must be composed of members in good standing at The Landings Association. They must have an exemplary record of volunteer service, which has resulted in enhancing the reputation of The Landings and its citizens, provided continued service within the Landings community resulting in the improvement of quality of life and/or the visual beauty of The Landings. 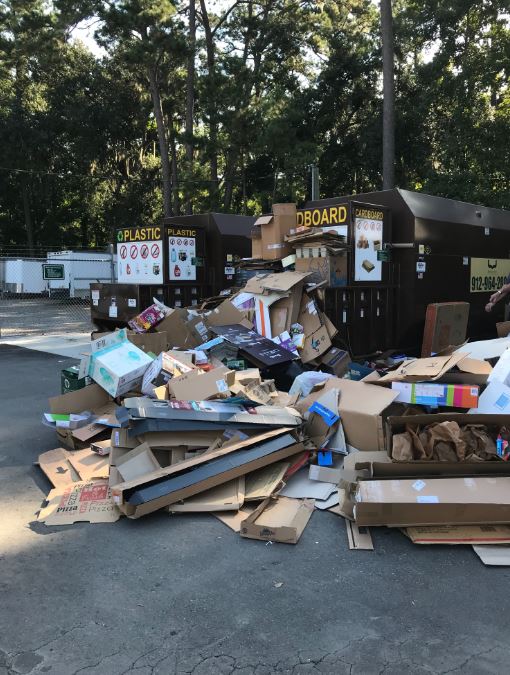 This picture shows how the Recycling Center looked littered with boxes before the R-3 Committee stepped in to help.

R-3 Committee accepts the award for Volunteer Group of the Year at the 2020 Annual Meeting.

Thanks to all R-3 Members & Volunteers