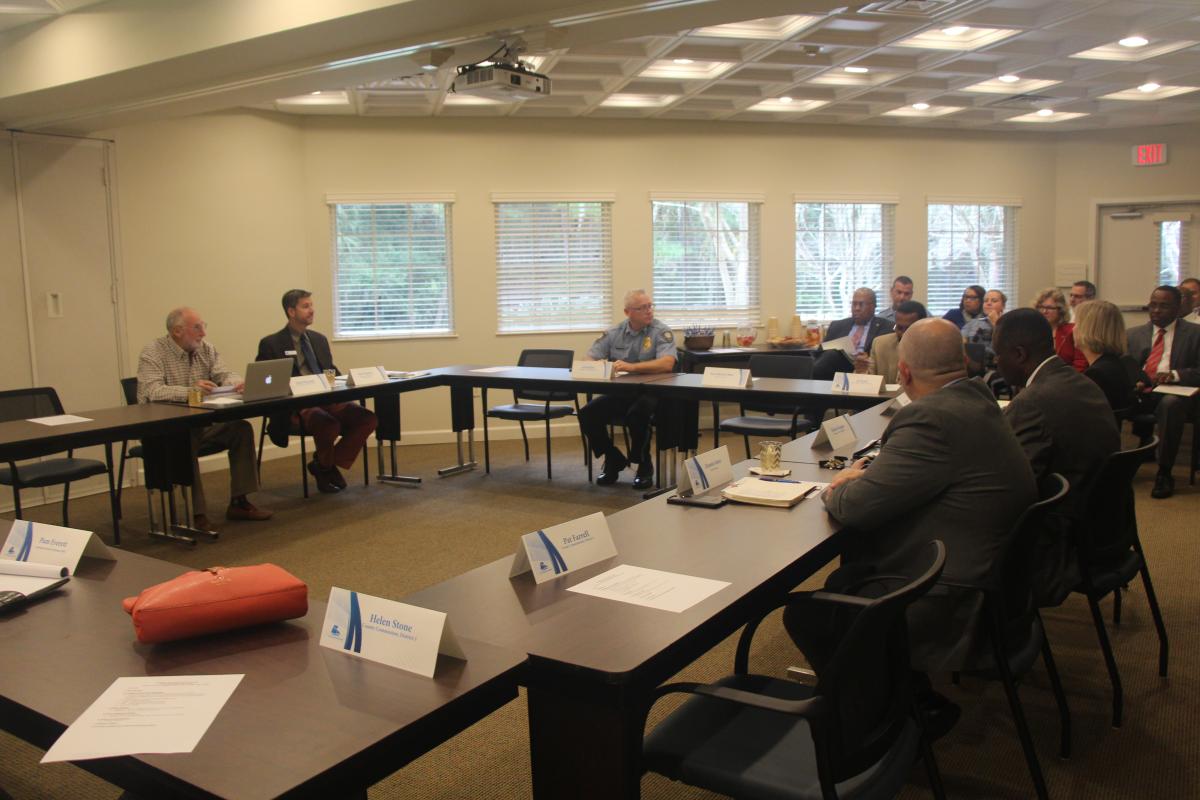 The Landings Association hosted its annual Landings Roundtable with elected and appointed officials on November 6. This meeting is organized by The Landings Association each fall to provide a forum for obtaining information, seeking support, or making requests on various issues impacting our community. Additionally, this meeting brings all the various parties together into one room at the same time, so everyone can state their issues and openly discuss them in a positive and respectful way. The agenda, developed by the Association, included a range of topics, as described below. 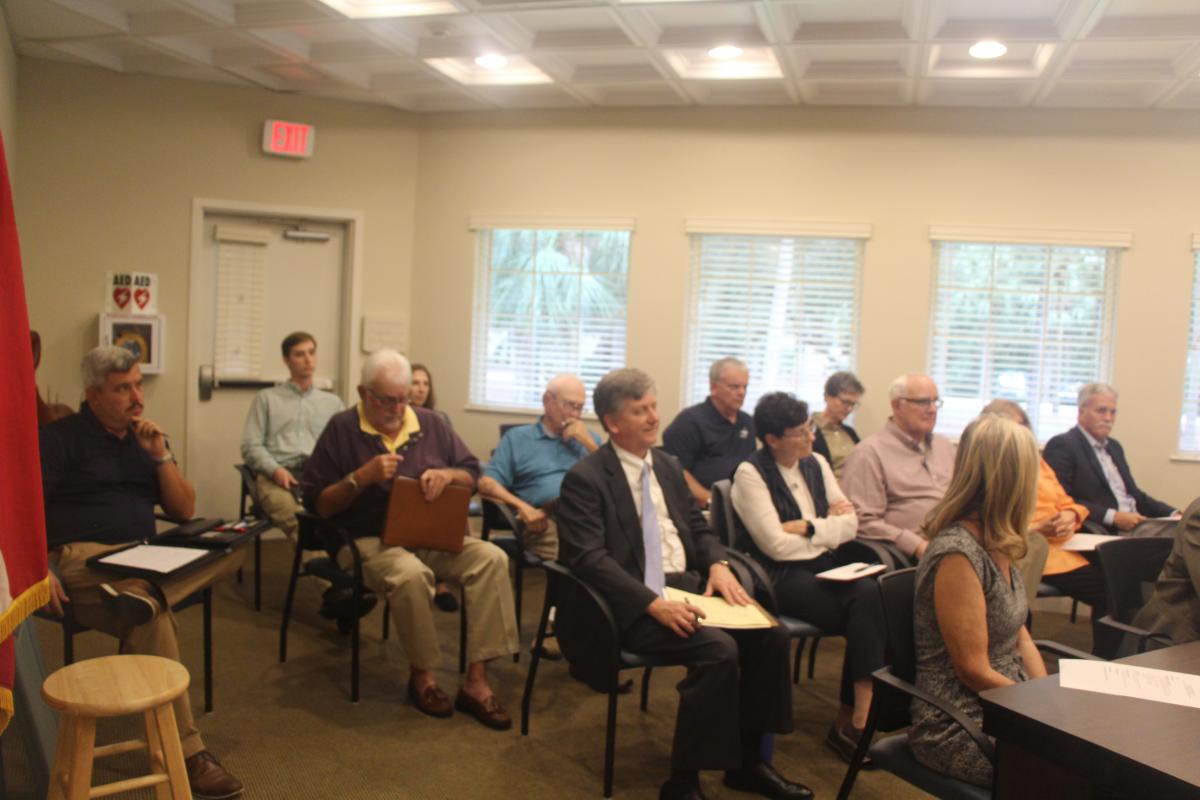 Chatham County’s Interim Engineer Suzanne Cooler kicked off the meeting by giving an update on the four-way intersection at McWhorter Drive and Green Island Road.

“Currently, we have quotes to install flashing beacons on all the stop ahead and stop signs,” she said. “We also are receiving quotes to install thermoplastic stop (the word “stop”) and rumble strips at the intersections. It wouldn’t be on The Landings’ side because there is no room for that, but it would be on the other three approaches. We do anticipate all three of those to be installed and implemented by the end of November.”

The County continues to look at improvements for the intersection, including a redesigned roundabout plan that would address the situation more long-term. More details will be shared as they become available and to gather resident input.

County Commission Chair Al Scott said there are no plans for fee increases at the County level that would affect Landings residents. He shared that the County recently adopted a rollback millage plan that decreased the millage rate from 4.99 to 4.91. “Residents will see a slight downtick in taxes in the unincorporated areas for the Special Services District thanks to our adoption of the rollback rate,” Scott said. 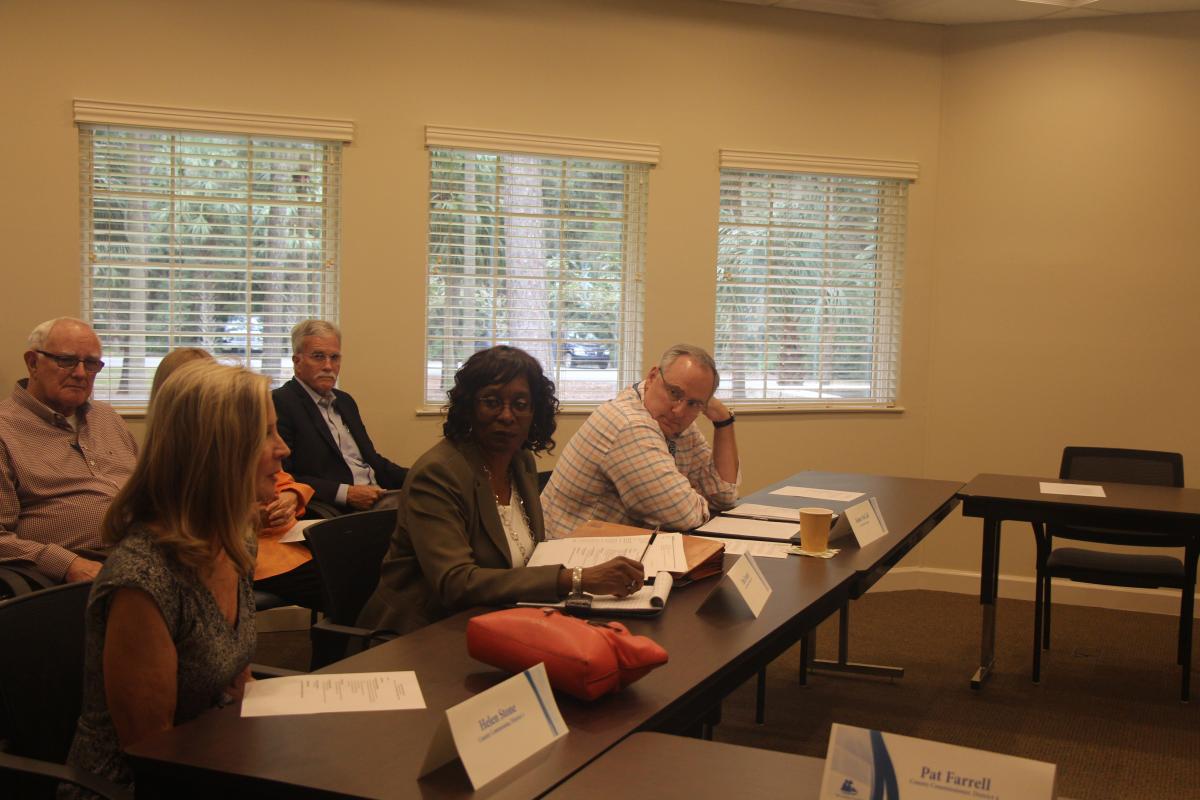 County Commissioner Helen Stone shared that the rollback for the millage, attributed partly to the restructuring of the police department, and is a win-win all around. She added that another positive change is that Chatham County now will take over the mowing from Waters Avenue to the island. Previously, GDOT handled this mowing on a cycle of three times per year. Chatham County will be able to mow more frequently, increasing the level of service.

Chatham County continues to explore a long-term plan for the excess of dry trash. As a short-term fix, they have identified a holding site on the west end of the County. However, they are aware they need a more effective way to handle the continual flow of dry trash debris.

Finally, Chatham County is looking at its rule for short-term rentals and is interested in learning how The Landings Association addresses the issue. Assistant General Manager/CAO Karl Stephens shared with the group that in accordance with The General Declaration of Covenants and Restrictions for The Landings, leases for fewer than 30 days are prohibited. Dwellings may be rented for residential purposes only and may not be used for timeshare, fractional ownership, or hotel purposes. Additionally, owners may not rent less than the entire dwelling. He agreed to share additional information as well as details related to the fine structure for such offenses with the County if they are interested.

“We had a bridge disruption plan about 10 to 12 years ago before the construction of the fixed Skidaway Narrows Bridge was constructed,” he said. “This won’t be a quick fix, and it will be long to put into place. However, we still have a variety of resources available to us that we could employ if needed. As we update the plan, there are many methodologies that will be included, as public safety is paramount. From there, we will work with the appropriate utilities and other commodity distribution throughout the island to make certain the plan is viable.”

CCPD Chief Jeff Hadley shared that the police department is 100 percent staffed, and crime throughout Chatham County is down 6.2 percent. He then introduced Captain Nick Ojanovac to share some Landings-specific stats. 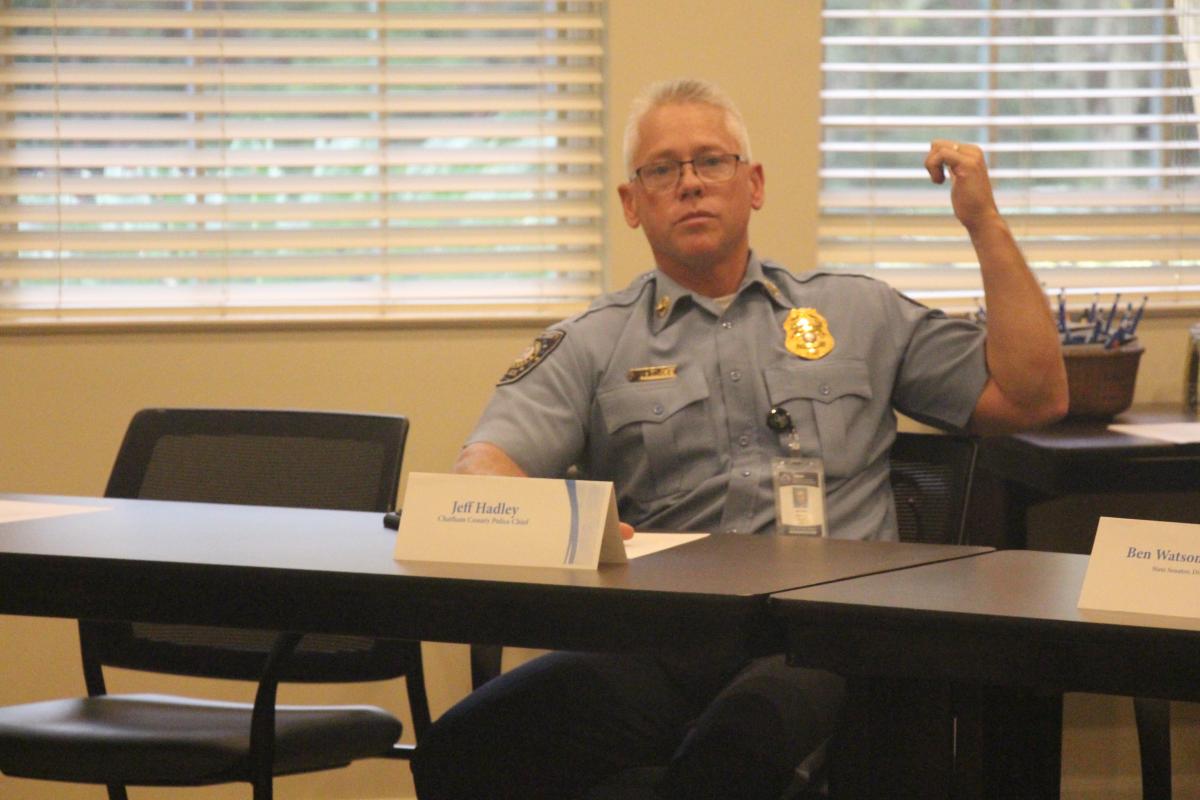 “The Landings is assigned to Beat 5 and is overseen by one permanent beat officer,” Ojanovac said. “Beat 5 includes The Landings, Burnside Island, PinPoint, the area near the Skidaway Island Institute of Oceanography, and the stretch down to Truman,” he said. Your numbers year-to-date are very good. They include 18 Part 1 Crimes, which is a 41% reduction from last year. These are all property crimes; there have been no crimes against persons in The Landings this year.”

Following the police update MPC Assistant Executive Director Pamela Everett asked for clarity on The Landings Association’s Master Plan Submission. Stephens informed Everett that work was still in progress on the plan and that staff would be in contact with her office. As background, in 2016, as part of the work on TLA’s Strategic Plan, staff reached out to the Metropolitan Planning Commission (MPC) to secure a copy of the community Master Plan. Staff planned to update the Master Plan to reflect two post-Branigar annexations -- Marshview Landing and Moon River Landing. However, the MPC advised that they do not have a Landings Master Plan in their records. Accepting the County Attorney’s counsel to draft and submit a Master Plan as a “clarification”, the Development Committee and TLA staff (through a subcommittee) have been working for a few years to memorialize the existing land use into a Master Plan.

Everett then switched gears to the Green Island Road Project, reporting that her office had not heard anything from the developer since the project was denied.

GDOT District Engineer Robert McCall shared Stone’s sentiment that the restructuring of duties between Chatham County and GDOT was a positive move. He said he anticipates the transition will go into effect the first of the year.

“We have all of the signatures in place; it is just a matter of pulling the trigger,” he said. 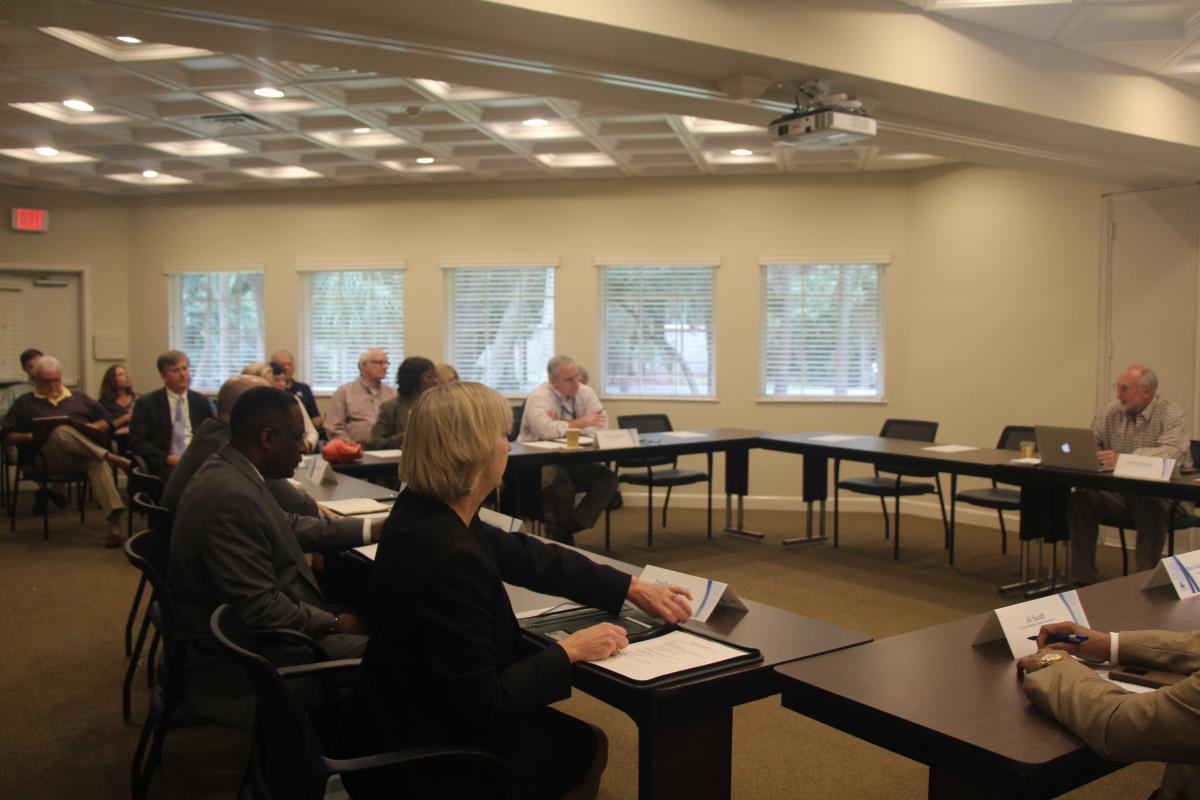 State Representative Jesse Petrea shared that Landings residents can rule out the possibility of increased fees coming from the State Legislature this year.

“We cut the income tax last year and will cut it again this year,” he said. “I can’t think of any fees you will get out of Georgia Legislature this year that will affect residents of this community.”

County Commissioner Pat Farrell shared that he sits on the Transportation Committee for the National Association of Counties and that through their work, along with other agencies, there is good news for qualifying counties regarding the Harbor Maintenance Trust Fund.

“This is a little-known trust fund,” he said. “Foreign vessels pay into this fund each time they visit a port. Under many administrations, more money goes into the fund than comes out. They have built $9 Billion in this fund. With our billion-dollar harbor deepening project, this money would be very helpful. The House just recently passed a bill to free up this money. It may not come in time for our project to benefit, but that was one of the driving forces I had to help get this fund released.”